Trusts and Passing on the Family Business

This is the fifth article in a series of eight about leaving family wealth to the next generation(s). The other Articles are entitled:

Trusts and Passing on the Family Business

Most people who do a Will for the first time do it more out of necessity than desire, in that they wish to address the formalities in case the unfortunate event happens, i.e. they die unexpectedly. However, in their own mind they know that the Will they have made is probably not fit for purpose when they think of those who are going to benefit from their estate in the future. They often look to address the shortcomings when time permits, but more often than not they don’t.

Aside from one’s spouse/partner, there are two sets of people one generally has to consider when looking at wealth management and preservation for future generations; the first being any minor children and young adults and the second, the more mature adult children who are married or likely to be so in the foreseeable future.

Most people understand why minors or young adults shouldn’t inherit directly large sums of cash or property. It is for this reason that people invariably seek the assistance of someone more mature and with experience to manage the assets and make any spending decisions. This is why for minors and young adults inheritances routinely are left in trust until the children concerned reach an age and/or maturity where they are able to “look after themselves”.

As regards more mature children the question often or not comes down to whether you give them cash, property or shares during your lifetime or when you have died.

I am a great believer in the family business and I am glad this still appears to be popular in Ireland where one can see parents encouraging their children to become actively involved as they get older. Inevitably and at some stage, mom and/or dad will want to transfer the business to their children. For obvious reasons, such as wealth distribution, family support, encouraging involvement and parents wishing to take a more “backseat approach” to the business, whilst still being involved and keeping a “watching brief”, the question inevitably arises as to how and when the transfer of the family business takes place.

More often than not the transfer of the business, let us say shares in a family company, will be done in two or three tranches.

This staged transition of ownership is very much in keeping with the well-founded view that a particular age doesn’t mean someone is financially sophisticated. As the value of an inheritance increases, so does the level of financial acumen needed to manage it and where this is directly related to a family business there are other peoples’ lives to consider, e.g. employees and their families, who can be affected by ill-founded decisions and careless action.

As your children get older one has the joy of a son or daughter getting or being married and then having grandchildren. But with all the blessings this may bring one has to be mindful that a marriage may regrettably break down and one is then faced with the repercussions of a divorce and the anxiety and uncertainty that this brings.

An ex-daughter or son-in-law could mean one ends up with a once family member now owning shares in the family company, with voting rights, possible board representation and claims, where perhaps post-divorce an acrimonious position results, for persecution of minority interests if dividends for instance are not paid. Worst of all, it could stymie the future prosperity of the family business.

It is at this stage that people often overlook the benefits of leaving assets in trust for mature children instead of having them inherit the property outright; whether this is during their lifetime or on their death. 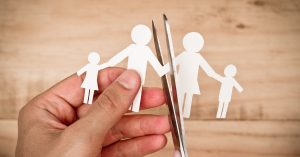 On divorce the courts usually look at the assets in a trust as a resource available to a former spouse, such that:

However, there are positives to consider, such as:

Those in business are often advised to consider a family company with multiple shareholdings, dividend and distribution rights, but these can get very complicated, giving shares away outright, do not address satisfactorily the issue of any increase in value of the family business or the abnormal event, such as a divorce or unexpected death.

So the upshot is do a Will, seriously consider where you are, what you want to do with your wealth going forward and think about setting up a trust to benefit not only the existing family generation but any future ones.

If you would like to know more about the points raised in this Article then please contact me or one of my colleagues at:

Read The Next Article in the Series: Powers of Attorney and Family Wealth

Read The Previous Article in the Series: One Trust or Two?